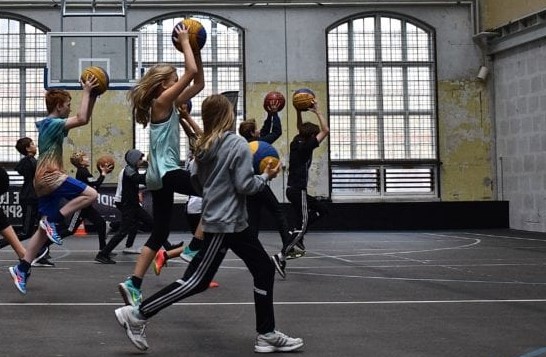 Facilities, activities and organizations function as a whole. More and more girls are getting involved in a sport or physical activity. They like to be co-creators and interact with peers and community. ©GAME
10 August 202228 September 2022 Marie-Georges Fayn

53- 1/09/2022 “Building empowering communities with young people around sport and urban culture in order to prepare them to become active citizens in a fairer and more inclusive society” This is the ambition of GAME, the Danish NGO that relies on sportsmen and women empowerment to change the world.

Founded in 2002 in the deprived neighbourhoods of Copenhagen, GAME registers thus more than 1,000 Playmakers (animators-coaches-organizers-coaches – GAME masters) in Africa, the Middle East and Europe and has more than 300,000 annual vistis at the activities from amateur or skilled participants (soccer players, basketball players, hip hop dancers, rappers, etc.) of all nationalities and all communities,

“At the beginning, we didn’t think about empowerment, as the peer-to-peer methodr. We were just three fans of basketball and hip hop culture, and we wanted to spread these practices to young people in disadvantaged hoods,” says Simon Prahm, GAME’s CEO and co-founder. “We wanted to be innovative. Unlike other operators, we didn’t go to young people and approach them as if we were talking to victims. We are interested in their potential and we help them unleash it through learning.” The GAME team went to the priority neighborhoods of Copenhagen (Mjoelnerparken, Urbanplanen) to meet young people who did not attend sports clubs.

“We saw the gap between the media’s images of violence and insecurity and the reality. We wanted to show their true face and we started organizing sports workshops. The first groups we created convinced us that we were on the right track. In these environments characterized by a lack of resources, these young people proved to be resourceful. They could relate to and connected with our approach, which was based on peer-to-peer links and on the values conveyed by sports, effort, merit, the team’s victory as a shared objective, positive dynamic instilled by the captain, and will to surpass oneself.

In addition, we knew how to implement with few resources because street sports are practiced with modest equipment or even without any equipment at all ; we have a good expertise of these facilities – an argument to put forward to institutions!

Within a few months, it was demonstrated that GAME could provide a high value-added social service with a small investment. Interested in these initiatives, the Danish Ministry of Integration began to support GAME.

It was only later that the term empowerment entered GAME’s vocabulary, when it was necessary to look for other funding. The managers studied the theories of John Andersen[1] and the definitions of WHO[2]’s lifeskills. “We had developed a new concept of sports and musical street animation from community players involvement. Analyzing our practice the notion of empowerment came about. The main idea is to entrust the sports animation to young people who speak directly to their peers. Our plus is our learning, practical method and its diversity, few theory, since we favour action, simulation and experience. We teach not only the basics of sports but also those of project management, team leadership, negotiation with partners, social inclusion… and even an introduction to business with our Street Sports Incubator. Thus, volunteers and GAME leaders have access to a wide range of skills. »

Sport as a vehicle for empowerment

When practiced under the right conditions, in a framework that respects the values, integration and gender equality, sport offers exceptional opportunities for leadership training, physical and mental development and empowerment. “It is the peer-to-peer mentoring and the content of our action learning that makes the difference.”

“GAME Academy”: creation and transmission of a specific knowledge

The movement has set up a “GAME Academy” which aggregates the knowledge developed over the years and the interventions. Co-funded by Erasmus+ ( European Union), this free access e-learning platform gathers +150 sports and empowerment drills as well as seven e-courses for all levels. Playmakers and GAME volunteers have participated in its design and regularly complete its database. The result is a wide range of introductory and advanced modules for all levels.

Topics cover basic knowledge about
– street sports or dances,
– their positive impact on health and the individual and collective mind,
– how to introduce people of all ages to their practice
– exercises to promote fair play, manage conflict, empathetic listening, etc.
– the street culture and its diversity as well as the values promoted by GAME

Regarding social and interpersonal skills, trainings focus on
– adapting communication to different interlocutors, players of different ages, local partners, parents, educational institutions…, media, social media,
– mastering techniques of animation, group management, organization of a tournament, recruitment and retention of volunteers,
– the ability to evaluate oneself as a coach and role model, to understand one’s responsibility as a peer-leader and to act accordingly (expression, behavior, attention to others, respect for diversity, gender equality, stress management…)

The initiation also includes the ability to find resources within the GAME organization and with the leaders, to benefit from the support of its annual calendar. The Playmaker must also know how to integrate his/her action into that of the NGO, the program and its objectives, and to exchange with other Playmakers.

Based on its experience, GAME has also developed expertise in innovative, low-cost, low-carbon and socially inclusive street sports facilities. This expertise has earned it numerous awards, including an IOC IAKS Gold Medal for GAME Streetmekka Viborg (2019)

Before the start of the Playmaker program, GAME used paid sports instructors. GAME decided to stop doing so in 2009. “We want a different kind of commitment than the one between the employee and the employer. The employee does what he is paid to do. But we train volunteers, we support them. They stay, because they are motivated, otherwise it would be a waste of time for them. In fact, our playmakers are very committed, they train and want to get the most out of the experience. In fact, we have an excellent retention rate, whereas other structures have a high turnover. The young people appreciate the additional knowledge they acquire, which allows them to gain confidence and leadership skills. We take care of their travel expenses. They can also earn money by carrying out different missions during the sports meetings that we organize, such as reception and ticketing (18€ per hour). Finally, they can also pursue a career within GAME and become a salaried manager… “

A 2019 survey of GAME volunteers shows that 93% learned useful things in other areas of life, 81% increased their motivation to participate in volunteer activities or get involved in their community, and 87% got to know people from a different background than their own.

It took us a long time to GAME to figure out how to attract women and we learned that we needed to rely on female instructors to do this.

GAME found that women’s motivations are less about winning than about having fun or learning new skills or socializing… « We want women leaders, women in parliament, and we encourage this civic engagement at an early age by allowing them to take on responsibilities in their community. As such our fieldwork is essential and we are proud today to have almost half of our Paymakers female compared to 25% in 2017! »

Selfpower-community, a site dedicated to collective citizen empowerment, focuses on bottom-up emancipatory initiatives. Yet, the empowering dynamics that bring social progress are also instilled by institutions or organizations with a social vocation. In this configuration, empowerment is considered as a lever integrated into education or development programs encouraging autonomy and gain of individual skills, but within an imposed framework. This framework generally excludes socio-political activities such as critical analyses of a culture, economy, governance or belief system that generate stigma or penalize community.

GAME NGO occupies a special place in this scheme first because it allows the two top-down and bottom-up dynamics to meet around its missions. It mobilizes learning and organizes its transmission so that young people from disadvantaged communities can develop activities related to sports and urban culture under the guidance of Playmakers from their ranks, prepared to manage projects. These peer leaders act as mediators, coaches, trainers, animators and educators. Unlike the original Freirian model [3], these guides are not professionals. They are volunteers who have responded to GAME’s invitation with an individual commitment to a collective action. Their autonomy and freedom of initiative are strong markers. The Playmakers remain in charge of their own street sport projects, contribute to the co-design of the e-learning base and ensure good circulation of information. At the end, the Playmakers have acquired or strengthened their sporting talents and their project management skills (individual empowerment). They have also become “empowers” for the group. They know how to mobilize energies around a project, develop local leadership and a sense of community, and facilitate cohesion, socialization, and cooperation between generations, genders, and ethnicities. They are able to develop a sense of belonging (community empowerment). They have learned to overcome blockages, be inventive and constructive, to achieve common goals, establish an equitable relationship with external agents (collaborative empowerment). Finally, those who wish to do so are supported in setting up a profitable business through business training and grants (GAME incubators). GAME’s action learning will have allowed them to reveal themselves, to put their new knowledge into practice in their daily lives and to know how to create social and economic opportunities. They reach a higher level of mastery of their destiny and expertise in group dynamics.

The training weekends (known as Playmaker Camps) are an opportunity to create close ties between Playmakers. These connections are extended in the framework of work carried out in thematic subgroups on subjects such as gender equity projects (e.g. Breaking Barriers, Climate Action initiatives), organizing of large scale tournaments (e.g. GAME Finals Beirut), etc.

GAME does not position itself in the field of political change. The NGO does not question the root causes of urban wastelands or the relegation of populations to second-class territories. GAME intervenes upstream to limit, in its own way, the social damage and to make young people want to make a positive commitment to their community. To do this, GAME receives public funding. However, GAME remains totally independent, with no subcontracting links to institutions.

With its Playmakers, GAME designs its own individual and group learning paths, its own active training courses and its own equipment. GAME therefore occupies a special place between top-down and bottom-up dynamics.

Through its many achievements, GAME shows that new spaces of autonomy and expression can born from instertices left between two blocks. These spatial reconquests serve as stages for the talent and creativity of young people who deploy their potential through activities that stimulate the body and the mind. Their accomplishments are also beneficial to the well-being of the neighborhood and the community.

GAME acts to increase skills of young people from poor neighborhoods, so that they gain confidence in themselves and in the future, they push further the experience, take up other challenges, reclaim other spaces including political…

Great Cause: Creating positive change in the lives of disadvantaged youth through the power of team sports and street culture

2002: GAME founded by Martin Schultz, George Goldsmith and Simon Prahm
10 countries host programs
1,211 active volunteers trained in the GAME empowerment model
79 GAME zones with weekly street sports activities
4 street sports facilities with 15,413 active members managed by GAME
268,109 annual visits at its Street Sports activities worldwide
80 full-time equivalent employees
4,6 M€ budget 2021 of which 55% financed by EU, ministries and municipalities
Special feature: GAME’s social capital is the GAME Academy platform and the knowledge of GAME Houses, innovative, low-cost, low-carbon, socially inclusive street sports facilities. This vision has inspired a number of award-winning achievements including an IAKS Gold Medal from the IOC for GAME Streetmekka Viborg 2019
Great ambition: more recognition in the capacity of young to transform the world, notably by lowering the voting age to 16
GAME is ranked 122nd on the top 200 NGOs in the world in terms of innovation, sustainability and results.

One Thought on “Street sports for citizen empowerment”