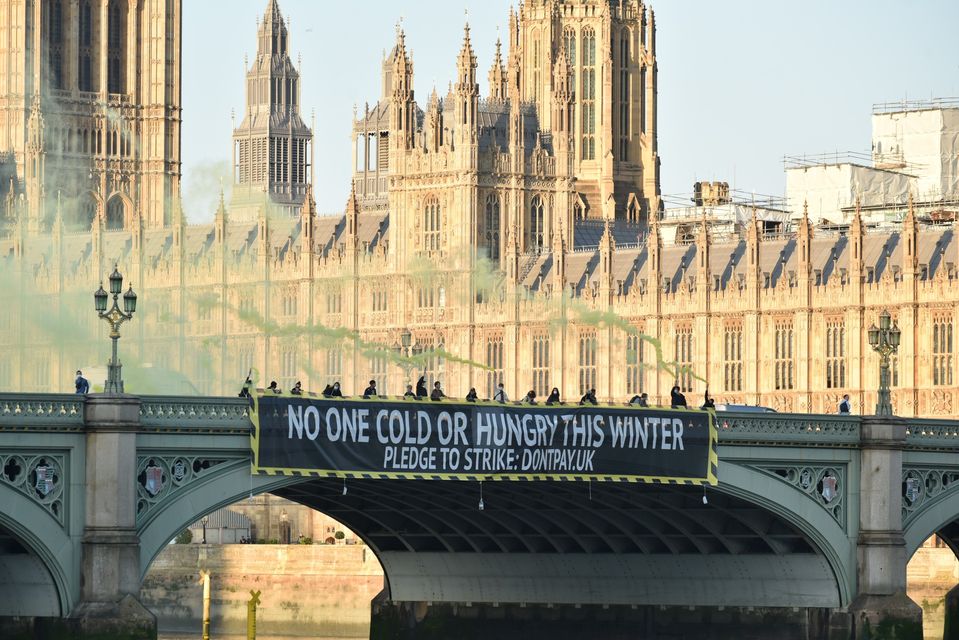 54- 01/10/2022 Faced with the British people’s growing protest of against the increase of more than 80% in the price of energy – making the average annual bill rise to £3,549 (€4,076) per household from £1,971 (€2,264) in 2021 – Prime Minister Liz Truss announced the freezing of energy bills at an average of £2,500 (€2,871) and this, only 3 days after her election. An historic “largesse” – almost unnatural for a conservative government – but somewhat forced ! Indeed, since June, social movements have been inciting the population to massive disobedience: not to pay their gas, fuel or electricity bills from October 1, 2022! In an economically, politically and socially weakened United Kingdom, the mass payment strike is spreading. This unusual group action expresses both the anguish of citizens in the grip of uncontrolled inflation and their ability to put collective pressure on the British government. The wind of social anger that is blowing across the Channel has come a long way. With Gareth Dale, who teaches politics at Brunel University, analyses the origin of its formation…

How do you explain the ‘summer of strikes’ in Britain?

Gareth Dale : Mass campaigns don’t arise automatically from citizens’ grievances. To explain this summer’s upsurge of social movements we have to look not only at the general anger and exasperation but also at some other specific circumstances, notably tight labour markets in some sectors.

In Britain, for decades, the working class has suffered a continuous decline in its standard of living. Stagnant wages make the rising prices unbearable. In 2020 the economy went into recession because of the pandemic. After the lockdowns, we saw an uptick in economic activity; all of a sudden, substantial sectors were short of hands and couldn’t find anyone to hire – exacerbated by Brexit. With these new strains on the labour market, some unions scented opportunities. They had retreated under the blows of Margaret Thatcher and successive right-wing governments, and even of the Labour Party under Tony Blair. Today, a new generation of leaders are channelling radical workers’ voices and demands. These include Mick Lynch[1] of the railway workers and Sharon Graham[2] of UNITE. This summer has seen a national strike – still ongoing – of 40,000 railway workers demanding a pay rise that would partially mitigate the price rises.

Gareth Dale : This has been another factor in the protest revival. The Tory government is vicious but weak. It was weakened by scandals and exhausted by four years of unfinished negotiations over Brexit. It has thrown out leader after leader, and is plagued by factional tensions. Social-movement actors recognise that they now have an opportunity to destabilize and challenge political authority.

The announcements of the increases in electricity and gas rates and social security contributions come in this politically tense context. The population fears the disastrous consequences of double-digit inflation on their purchasing power, which has already been eroded since 2008.

Are we seeing a convergence of struggles for climate and for the defence of living standards?

Gareth Dale : Streets have been occupied by environmental movements such as Extinction Rebellion[3] or Insulate Britain, which are committed to civil disobedience and direct action. Enough is Enough[4], a campaign against the worsening social crisis, seeks to bring together various oppositions under its banner: unions, community organizations, and sections of the Labour Party. The group demands an end to hunger, decent housing for all, lower energy bills, windfall taxes on energy profits, and increased wages. The struggles to protect the environment and mitigate climate change and those against rising energy prices are intrinsically linked. It is obvious that the renovation of Britain’s leaky housing would lessen this country’s carbon emissions and lessen the price paid for electricity and gas.

Will these struggles converge? I don’t know; but there is increasing awareness that the various grievances are the product of a single system, capitalism, that is wreaking terrible harm. Many people see the need for radical change, are becoming politicized and raising far-reaching demands.

And tomorrow, won’t the campaigns spread throughout Europe?

Gareth Dale : It’s difficult to make predictions as the processes I’ve been describing are context specific. But yes of course, a European conflagration over living costs is possible since we face the same impositions and iniquities. We all face the long-term terrors of global heating and the short-term terrors of spiralling energy costs.

Don’t pay UK was founded by an anonymous group of about 20 people in June 2022 with the slogan of boycotting energy bills effective October 1, 2022. The objective is to reach 1 million members and to make energy suppliers bend[5]. Their members are invited to carry out street actions, create local committees and communities. The organization provides them with informational and strategic support. The group offers sessions on energy crisis, cost of living and bill challenges. These resources are developed with the help of legal experts. Don’t pay UK also provides advice on dealing with energy suppliers and managing energy debt with the support of consultants. The consequences of non-payment are explained (credit rating reduction, additional costs…)

Don’t pay UK initiates its members to manage local actions such as installation of banners in public places, holding of meetings or running community stands, press relations and provides them with the model of the visuals (leaflets, stickers…). These initiatives are widely relayed on social networks which contribute to the spread of messages and increase of the movement’s audience.

[1] General Secretary of the National Union of Railway, Maritime and Transport Workers

[4] Protest movement calling for a national program to insulate all homes by 2030 to reduce energy consumption. The group asserts its demands by organizing traffic blockades. The first campaigns began in September 2021

[5] This movement is inspired by “poll tax”, a flat-rate rental tax decided by Margaret Thatcher in 1990 and decried for its unfairness. This was followed by riots that contributed to the fall of the government.